The legend of the Populus. 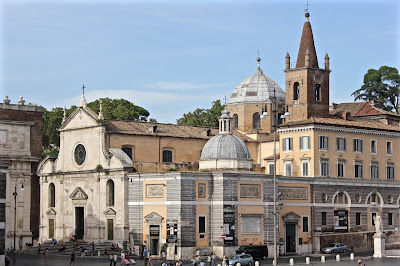 The church of Santa Maria del Popolo is located on the site where there was once the tomb of Emperor Nero - Il Sepolcro dei Domizi - the place where he supposedly suicided. A poplar tree (populus in Latin) was planted in his honour - it indicated the exact spot where he died. Apparently this site was known to be haunted and damned; spirits and demons had taken up residence in that area and at night they terrorised the population. 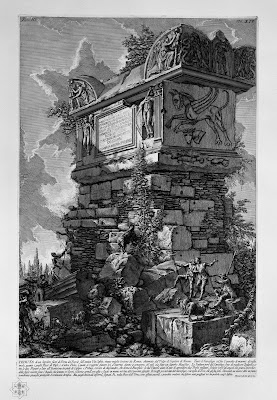 In the year 1099 the scourge of these evil forces became so intolerable that the people turned to the Pope to ask for his intervention. Pope Paschal II prescribed on the first place, three days of fasting, during which time he retired in solitude. In one of the three nights of his retreat, the Virgin appeared to him to show him the way to purify the area from evil spirits. She ordered him to tear the poplar tree down, dig up the ashes of Nero, burn them with the tree and disperse them in the river Tiber. The Pope acted according to the Virgin’s order after the days of fasting.
Miraculously the haunting ended and the Pope decided to build a church on that spot. He processed from the Lateran to the new church with an icon of our Lady which was known to have been painted by St. Luke himself - the church took the name of Santa Maria del Popolo - named after the poplar tree - populus. 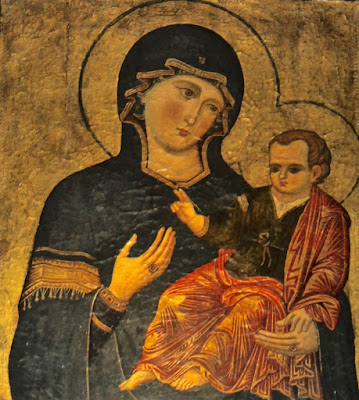 The church was rebuilt in the 1470s in the Renaissance style and it still brings the name of that tree and so does the piazza in which it is located: Piazza del Popolo. The legend of its foundation is represented over the high altar in a stucco relief. 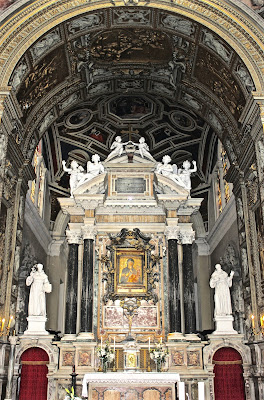 The stucco reliefs above the high altar with the old icon.