With the beginning of the Grand Tour in the 18th century, young British men and women, many of them Church of England, were sent to Italy to learn about the marvels of classical antiquity, unsurprisingly Rome became the main focus of such trips. An early Anglican presence began in 18th century Rome with the exiled Stuart court. From about 1721, the family was very keen on showing religious tolerance, and thanks to Pope Clement XI's permission, they allowed Protestant courtiers to bring their own chaplains and to hold services in the Palazzo Balestra in Piazza Santi Apostoli, a certain Dr. Cooper was known to be the first of these chaplains. The first Englishman of a long list to be buried in Rome's Protestant cemetery was a certain George Langton from Oxford University, buried there in 1738. Before the unification of Italy in 1870 it was forbidden for non-Roman Catholics to gather together for public worship and so the first “Roman Anglicans” used to worship privately by bringing with the copies of the Book of Common Prayer and the King James Bible - travel-pocket-sized version of these existed since the 17th century. Sometimes even their own chaplains! 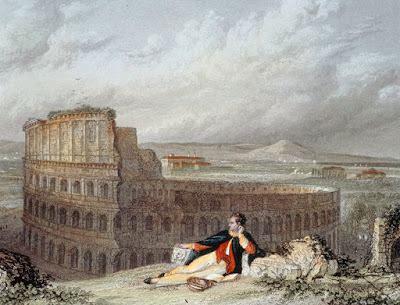 Early 19th century print of Lord Byron by the Coliseum.

But our story here begins over 200 years ago, starting in 1816, when organized Anglican worship has been celebrated here for the first time. Worship according to the use of the Church of England had not been permitted even within legacies or protected enclaves within the Papal States. It was the year after Waterloo when on 20th October 1816, Jerseyman Corbert Hue arrived in Rome from Jesus College, Oxford - he was the first Anglican minister known to have officiated publicly the liturgy of the Book of Common Prayer in the Eternal City, to be precise, on 27th October 1816, in a rented room in a palazzo at the Via dei Greci 43, just a block way, from today All Saints’ church. During worship Rev. Hue boasted: “the whole morning service, in the capital of the Pope, and within sight of the very Vatican!” Within three weeks, Sunday services were attracting between thirty and forty people to his rooms, and at the request of his congregation, he started delivering sermons. Soon, people began to be turned away for lack of space, and more spacious rooms were rented near Trajan’s Column. 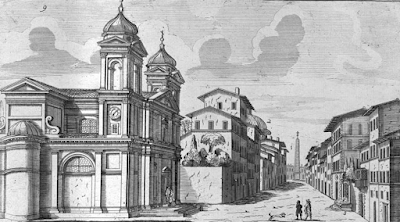 A 17th century view of the corner between the Via del Babuino and the Via dei Greci.

It was thought wise at that point to ask for papal permission to conduct public worship in English, Pope Pius VII was reported to have replied through his Secretary of State, Cardinal Consalvi: “The Pope knows nothing, and grants nothing” - an icy reply, but a very papal positive response! What the eye doesn’t see... 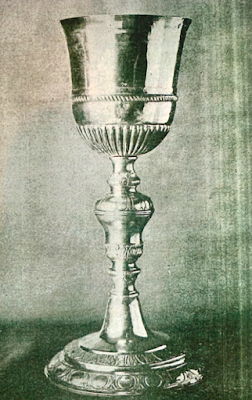 A 1915 photograph of the chalice used for the first Anglican celebration of  Holy Communion in Rome near the Piazza Colonna in 1816.

Mattins and Holy Communion were first said in the meeting rooms at No. 6 in the Piazza Colonna on 29th December 1816 —some 120 people were in the congregation, and a staggering 97 communicated. 220 pounds Sterling was collected, and distributed among the poor of Rome, through what became known as the Charitable Fund. A tradition which continues to this day. The rooms at the Piazza Colonna were used for another two and a half years. A succession of ministers succeeded Hue, in 1819 services were being conducted in whichever lodgings the priest occupied at the time, following a warning that the papal government did not see in a good light the English having an established house of worship. Services continued to be well attended over a hundred were present at the Good Friday liturgies of 1821. In 1822, rooms were rented in the Palazzo Corea, by the Mausoleum of Augustus and by November 1823 the congregation moved to an apartment in the Via Rasella, just near the Quirinal Palace, where the Pope resided. It is said he preferred to have one Anglican place of worship as many smaller congregations, therefore there was never any disruption. 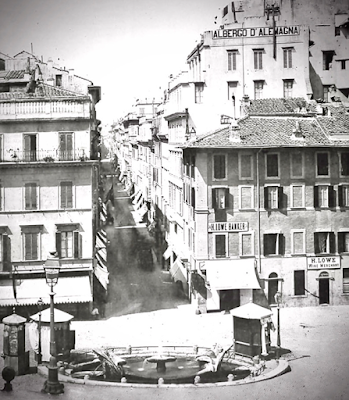 The “Ghetto Inglese” in a late 19th century photograph.

Since the times of the Grand Tour, the English community in Rome had been based in the area of the “Tridente”, roughly between the Piazza del Popolo and the Piazza di Spagna. The area flourished during the 19th century and it became known as the “Ghetto Inglese” or the English Ghetto. Members of the English aristocracy would sojourn here, as well as celebrities of the time, among them John Keats and Percy Bysshe Shelley, whose house still exists today as a museum, but also artists such as Turner or writers such as Dickens stayed in the area. With the advent of trains and fast ships travel became cheaper and the middle classes also flocked to the area by the mid-19th century. There were all the commodities needed: British or American hotels, apartments for rent, photographers, bookshops, chemists, dentists, doctors, nurses, bakeries, groceries, wine merchants, bankers, and of course, artists - but also tailors, postal services, and even a telegraph office. There were even daily English journals, such as the Italian News or the Roman Times, as well as a branch office of the White Star Lines! Some of these still survive, such as the Hotel d’Inghilterra and the Babington Tea Rooms. It was said that one could always tell how men Englishmen were in town by the numbers of coaches parked in the Spanish Steps, as English carriages were too large for the gates of Roman palazzos. The English chapel first, and the English church then, were conveniently established in this area. 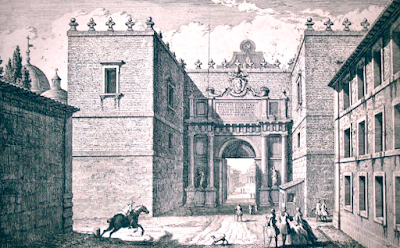 The Porta del Popolo in a late 18th century print.

History for the Anglicans in Rome substantially changed in 1825, when an anonymous “distinguished statesman” guaranteed the rent for the first three years of the upper floor of a former granary outside the Porta del Popolo, which was to serve as the “home in Rome” for the English community in Rome for over sixty years, until 1887. It eventually became known as the “Granary Chapel”. Only one photograph seems to have survived of the east-end of the building. The chapel offered services every Sunday at 9 AM, 11 AM, and 3 PM. Occasionally, there was mention of an “hostelry” occupying the ground floor, once, even a hint of a “wild beast show” that occasionally disrupted the services! The choice of the building had been approved by the government, the location was chosen outside of the walls simply because nothing could be found within the walls to host a congregation that could number at times seven hundred. In January 1828, the chapel committee first placed the chaplain on a stipendiary basis, offering him 100£ a year. Rome was too hot in the summer and to escape the heat, it was agreed that the Revd Richard Burgess would serve Geneva during July and August. The new chapel also brought new life to the community’s Charitable Fund, more than 230 families were being helped at the time, the chaplain also visited the poor in their tenements and it is recorded that some funding went towards to the Jewish population then still living in the unhealthy ghetto. 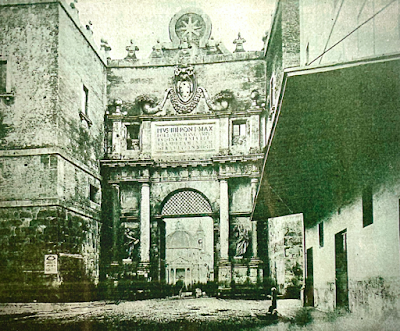 The Granary Chapel on the right in a mid-19th century photograph.

Between the 1820s and the 1880s eight chaplains came and went, soon the jurisdiction of the chapel came under the newly established Diocese of Gibraltar, created in 1842, to cover the churches of the Mediterranean. It has to be said that it took some time for the committee to accept the authority of the new diocese! By 1844, the congregation kept growing and with shortage of room, the building of a proper church was requested, but it came to nothing. In 1848, Rome underwent a siege, like most European countries, Italy was seeing a time of political change; troops both Roman and French occupied and damaged the Chapel, which was only restored for public worship in 1849. The committee did not have an easy time repossessing it and putting back its fittings, which had been stored in shops hastily rented for that purpose.

A mid-19th century photograph of the Granary Chapel on the right.

In 1850, the Revd Francis Woodward, who today lies buried in a fine tomb in the Protestant cemetery of the Piramide, was appointed chaplain - he was to stay for fifteen years and he firstly introduced music to the service, not only by fostering a choir but also by seeing to the installation of an organ from Prussia. 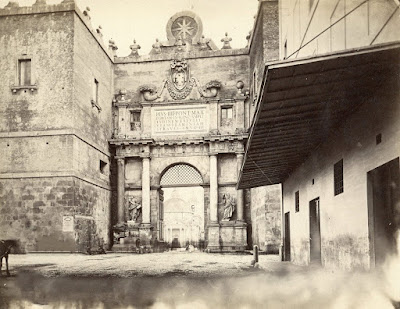 A photograph of the Granary Chapel from the early 1860s.

The Granary Chapel could be accessed via a staircase and it consisted of a large whitewashed room with chairs and with a chancel at the end enclosed by an altar rail, within it there was a communion table and pews. A wooden pulpit and lectern were also in use. In 1865, under Woodward's tenure, the chapel moved to a larger room opposite the previous one, in the same building, and the chancel was refitted by English architect William Slater, who also designed the marble reredos, now to be found at All Saints' church in the hallway.

Crowds gathering for worship outside the Granary Chapel in a 1851 print from the Illustrated London News.

At this time, long-term plans for the housing of the clergy were being discussed by the committee and by 1864, the Society of the Propagation of the Gospel (SPG) accepted an invitation to become patrons of the Granary Chapel, with the purpose of appointing its minister. In 1870 came the end of the Papal rule over Rome and the arrival of the Florence-Naples railway brought a new era to Rome’s tourism - church accounting went from Scudi and Bajocchi to Lire. Change was in the air also for the Anglican chapel, despite new liturgical furnishings, the old granary had become unsatisfactory, and worshippers were regularly incommoded by downstairs users; the urban filth and the congestion of traffic close to the Porta del Popolo was also another problem. In 1871, the committee debated whether to “render the present chapel more ecclesiastical in its character” or to build a new church with a library and a house for the chaplain. They called upon the advice of a certain George Edmund Street of London, one of the most renowned advocates of Gothic-Revival architecture in the 19th century, as well as a devout Christian. 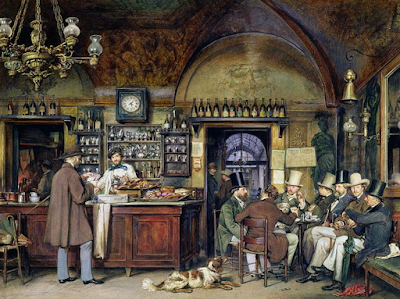 The Caffè Greco on the Via dei Condotti in the late 19th century.

This was a time of great religious conformity and while we know some of the name of the parishioners of the English Chapel, it is important to remember that many of the residents of the so-called English Ghetto around the Spanish Steps would have been worshipping at the Granary Chapel, among them William Ewart Gladstone who was staying in rooms by the Spanish Steps. Between 1847/48, Florence Nightingale was “in Rome to try and find her soul”. It is reported that the Duchess of Cambridge and other members of the Royal Family were regulars at the English Chapel during the 1840s, other aristocrats attended regularly. Other worshipers may include J. M. W. Turner, W. M. Thackeray and Robert and Elizabeth Browning. Edward Burne-Jones, who designed the mosaics for the American Episcopal church in Rome, stayed also in Rome while overseeing the construction of the present English church. Edward Lear lodged in the Via del Babuino and was known to worship at the English Church and to give rather generously.