Today is the feast of St. Marcello so I visited the saint's basilica in Rome. The church of San Marcello al Corso hosts a wonderful, dark wooden crucifix by the fourteenth century Sienese school. 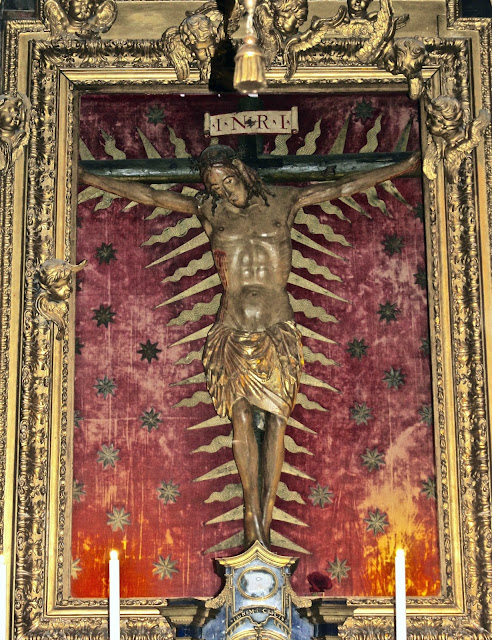 The sculpture is covered with gold dust and it is considered by the scholars to be the most realistic model of the crucifixion in the whole city to the point that it gave rise to a curious rumour: its author in order to portray the passing of Jesus in the most realistic way killed a charcoal burner in his sleep and while he saw the poor man breathing his last breath he sketched the figure he would have carved in the wood… thank God this is only a legend. However, the real history of the crucifix is very different - it contrasts with the legend because of the many stories of miracles attributed to the statue by the Romans - the first dates back to 1519 when the crucifix hung in the nearby church of the Oratorio del Santissimo Crocifisso which caught fire on the night between 22 and 23 May and was completely destroyed. 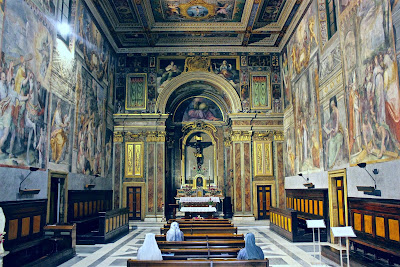 At the dawn the people rushed to the church - the scene was of great desolation but the crucifix remained intact and remained above the altar, lit by oil lamps… Immediately a group of devotees began to gather every Friday night at dusk to pray and light lamps at the feet of the statue. The so called Confraternita del Santissimo Crocifisso still exists today. Another miraculous episode dates back to the time of the great plague of 1522. The plague struck Rome so violently as to cause concern that the city remained without inhabitants. Mindful of the miracle of the fire, the friars of the order of the “Servants of Mary” decided to take the crucifix in penitential procession from the church of San Marcello to St. Peter's Basilica. The authorities, fearing the risk of contagion tried to prevent the religious procession, but the collective despair did not accept the ban and the sculpture of the Savior was carried through the streets of the city and followed by public acclaim. The chronicles of the time say that the procession lasted sixteen days, 4 to 20 August of that year. And that's because, as they proceeded, the plague receded, so that each district was trying to hold back as long as possible the sacred image. When it returned to San Marcello, the plague had completely ceased and Rome was saved. Since 1650, the miraculous crucifix is ​​carried to St. Peter, on the occasion of Holy Years. 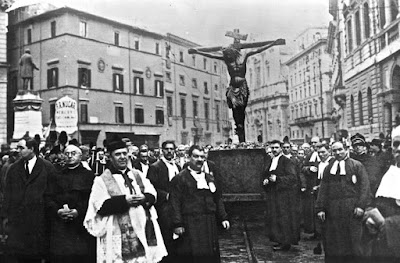 A procession with the crucifix in 1931.

The crucifix, still in San Marcello is in a beautiful chapel with frescoes by Perin del Vaga, from Raphael's school. 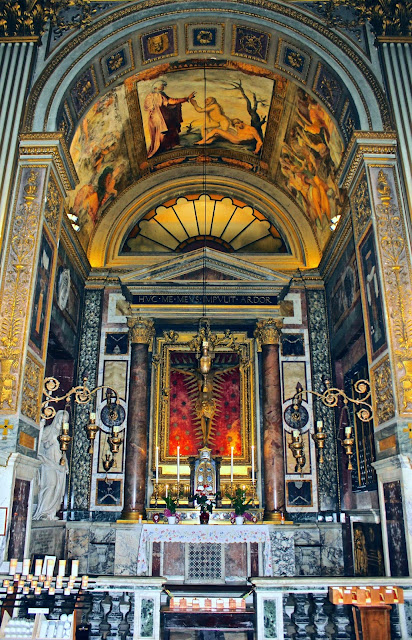 The Chapel of the SS. Crocifisso in San Marcello al Corso.