The Anglican Community in Rome, a new dawn - a dignified church building.

On this third article on the history of the Anglican community in Rome we will deal with the foundation of the present church building of All Saints', remembering those painstaking troubles and heartfelt joys of such a complicated process, and with our thankfulness for the effort of all those who made it possible for us to worship in such a gorgeous space.
George Edmund Street (1824-1881) was a pupil of Sir George Gilbert Scott and became one of the foremost architects of the Gothic Revival style in England, he is better known for the design of the Royal Court of Justice in the Strand, where his statue also is, but was throughout his life mostly busy with ecclesiastical commissions. Many of these were congregations in the continent, among them: Istanbul and Genoa, and also the American Episcopal parishes of St. Paul’s-within-the-Walls in Rome and Holy Trinity (now- Cathedral) in Paris. In England he designed the likes of St. Mary Magdalene’s Paddington and St James-the-Less in Westminster. Street was a devotee of the high church movement and the prominence of the altar in his churches are a sign of this. He became President of the Royal Institute of British Architects in 1881, and he was finally given a funeral a Westminster Abbey. 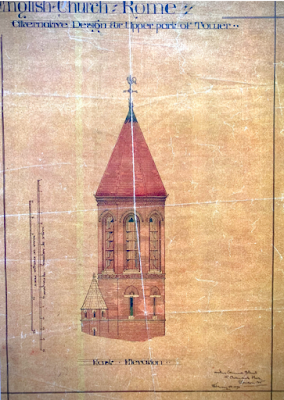 Mr Street’s first proposed design for the spire of All Saints’ Church.


Street first designed a project for an English church in Rome in 1872, before the current site of the present church was found. Its design was rather remindful of that of his American church in Rome. An excerpt from "The Building News", published on May 24, 1872, reads: “THE Church proposed to be built for the English congregation in Rome was designed by Mr. G. E. Street, for a site which it was hoped to obtain close to the Porta del Popolo, inside the walls, and so placed us to make the building very conspicuous from the Piazza. This site has not, however, been obtained, and the design which we publish will, therefore, no doubt have to be much altered whenever the site is finally decided and obtained. The American Episcopalians have been more fortunate than the English, having secured a capital site for their church on the new Via Nazionale, and for which Mr. Street is now, we believe, making the plans. The English Church is proposed to have accommodation for 800 persons, together with a house for the clergy, library, vestry, &c". The original project was soon dropped amidst difficulties of different nature. 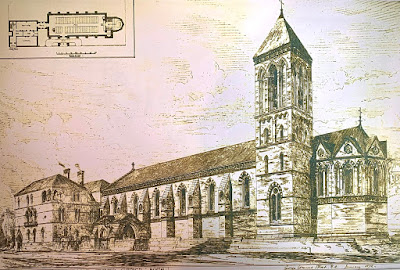 Mr Street's first design for an English church in Rome, 1872.

Finally, Street came to Rome to design what would be his last commission - for his death would come shortly before the laying of the foundation stone. Eventually, the decision to build a new church was taken in 1874, when the Municipality of Rome needed to demolish the Granary Chapel to make room for amenity and traffic purposes outside the Porta del Popolo. Today a Cafe occupies the location of the first Anglican church of Rome. The work was eventually supervised by his son, Arthur Edmund, at times with the collaboration of Edward Burne-Jones and William Morris, who also designed the church’s chancel screen, pulpit and baptismal font. Street replied to the committee with a project of “the kind of church suitable for the Roman climate”. In less than a month, he came to Rome to meet the committee - it is interesting to read from the records that “it seemed generally agreed that English Gothic was not appropriate” for Rome. No other building in Rome resembles All Saints’ in its English Gothic-Revival brick, though with Italian elements, such as the use of brick motifs or the use of marbles inside - which Street observed in Northern Italy and recorded in his “Brick and Marble Architecture” book. In the mid-1960s a BBC commentator said that “All Saints’ might not bout of place in Maida Vale or Manchester” - he proceeded by adding that ours is “a dignified and scholarly building, the interior in particular, being excellent of its kind”. 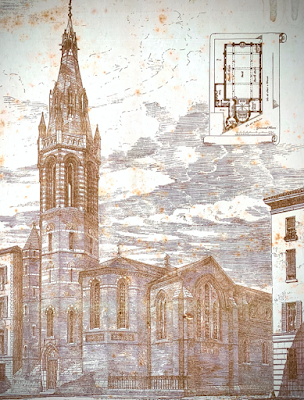 In January 1874, while the architect was still discussing various possible sites for All Saints’. One of a series of a short-term chaplains, the Revd Arthur Shadwell, who had been appointed in 1869, saw the need to make moves towards the provision or building of a new church - a statement was authorized to go in the London Times to appeal for subscriptions.
In 1875, began the long ministry of the Revd Henry Watson Wasse, who was to see through the building of the new English church of All Saints’. He would remain in office until his death in 1891 to enjoy the benefits of the new Street church. The architect himself came to Rome in 1876, with plans for adapting and improving the Granary Chapel and to add a bell tower - the decision was then changed when the Comune di Roma planned to pierce additional arches on the Porta del Popolo gate and to allow room for a new carriage way outside the walls, the area had not been altered since 1655 when Queen Christina of Sweden arrived to Rome after abdicating her Reformed faith for the Roman Catholic one. The Anglicans then proposed the Comune to exchange the Granary for another plot of land to build a new church. 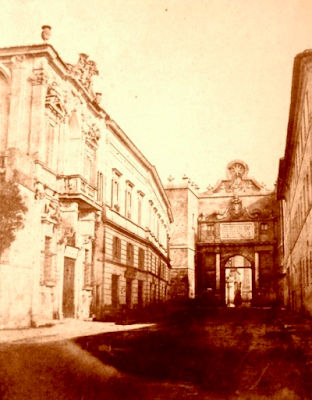 The Porta del Popolo in a mid-19th century photograph with the Granary Chapel on the right.

The Comune offered a former ruined convent on the corner of the Via del Babuino and the Via di Gesù e Maria - which eventually the community accepted. The SPG eventually interned and accepted the exchange. In February 1880, Mr Street informed the chaplain that the SPG had requested him to proceed with the plans for the demolition of the old convent. Work began in summer 1880, nineteen feet below the future threshold of the church’s main door objects from the 1st century AD were found, including bronze heads and a bust of Nero - then purchased and bought by a Signor Scalandrini for the Capitoline Museums. A head of Agrippina the Elder was found in another part of the site - it was also discovered that the English church stands on the site of the villa belonging to Sextus Africanus, a colleague of Osterius Scapula, Governor of Britain in 50 A.D. An 1826 diorama of the “Tridente” area by Giuseppe Valadier and Tommaso Falcetti in the Palazzo Braschi, it shows the former Augustinian convent that stood on our church’s site.

The contractor was instructed to go down as deep as thirty feet to make secure foundations and to eliminate excess standing water, “it was soon found that the cost would be enormous” and a lawsuit followed. It took seven years to build church, a time marked by financial problems. Despite the lamented death of the architect, only in his fifties, the previous year, Easter Day, 10th April 1882, was a brief interlude of hope and joy as the foundation stone was laid. At 3 o’clock Evensong began in the old chapel and it was terminated after the third collect, and the congregation moved through the gate, across the Piazza del Popolo, and down Via del Babuino to the building site. At least fourteen Anglican clergy, including the American rector and two other Episcopal priests gathered on the site, and were joined from a “robing tent at the west end” by Her Britannic Majesty’s Ambassador and personnel from the British Embassy. The choir was enhanced by several brass trumpets, “sang the Old hundredth psalm as the procession moved toward the platform. The day was fine and the sun very powerful” - "English, American and Italian flags decorated the site, and the ground was strewn with evergreens. About one thousand people were assembled and many Italians took a great interest in the proceedings and contributed to the collection made after the service. The singing and the responses were very hearty”. The contemporary account goes on: "The Honourable Mrs Walpole had placed in a cavity in the stone a bottle containing a sovereign of 1882, a twenty-lire gold piece, paper money then in circulation, and a list of the committee and subscribers”. The inscription on the granite stone reads: 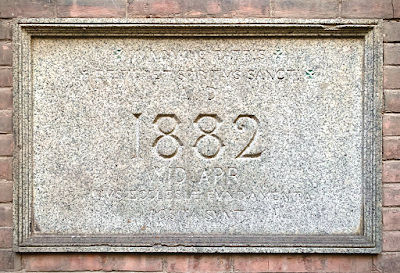 The inscription above the site of the foundation stone on the Via del Babuino.

Five whole years elapsed before the church, or part of it, would be ready for worship. While no large church building can be erected swiftly, All Saints’ birth pangs were long- drawn-out and must have been a cause of great anxiety. Other causes for the delay was the difficulty in finding the various types of marbles which had been specified for use by Mr Street. Those ordered from Greece could not be obtained, as the quarry was exhausted, so it had to be obtained locally. By 1882, the cost of the whole plan rose to about three times higher than that proposed in 1876, in 1883, stalemate was reached. The Building Found was empty and the SPG wanted to have all work stopped. At which point, the chaplain provided a loan of about 5,000 pound Sterling to 1886 - much of it was never paid back.
In 1894, The Revd. Wilfrid Stanton presented to All Saints, on trust, a large organ built by Peter Conacher & Co. of Huddersfield, Yorkshire, England. The instrument, with three manuals and pedal, stood in the space now occupied by the Blessed Sacrament Chapel. 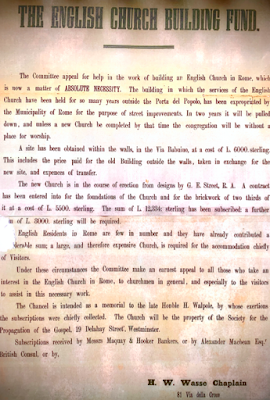 All Saints’ only surfaced from its long period in the red in 1920. By 1885, the chancel end was finished and roofed, the tower was up to one third, and the vestry with the library above had been completed. About a year later the nave and aisles were completed thanks to another loan of the then chaplain, Canon Wasse. After Mr Street’s death, his son, Arthur Edmund, oversaw the works - often times aided by Edward Burne-Jones, who had been involved in the work of St. Paul’s-within-the-Walls, the American Episcopal parish, and William Morris. 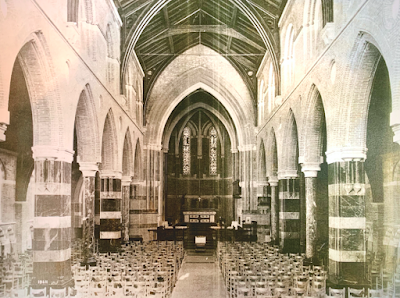 An early picture of All Saints’ Church right after completion in the late 19th century.

After a wet Good Friday 1887, the chairs from the old building were all moved to the new one and on Easter Day, which turned out to be “a very lovely day”, the first service was Holy Communion at 7 am, celebrated by the Revd V H Palmer with 150 communicants. The next service at 8.30 with the Bishop of Carlisle, the Right Reverend Harvey Goodwin, previously Dean of Ely and member of the Building Committee in London, drew 200 communicants. He also gave the address at Evensong at 3 pm. A Sung Eucharist was celebrated at 11 am and it drew a further 250 communicants, it was celebrated by the Bishop of Gibraltar, the Right Revd Charles Sandford, he also preached “a fine straight sermon” on the “work and message of our church in Rome”. He had performed a similar duty at the opening of Mr Street’s other church in Rome on 27th March 1876. Thus began, on Easter Day 1887, on its new site, in the heart of “English Rome”, the stable ministry and worship of All Saints’ Anglican Church, which continues to this day, after over a century and a half! 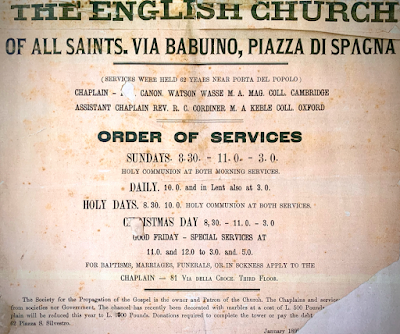 Mrs Wasse, wife of Canon Wasse, made brave efforts (and offers) to have the unfinished tower completed but there was so much prevarication that the spire could only be completed in time for the jubilee of 1937 thanks to an anonymous donor. Many years later, in about 1960, Pope John XXIII commented to the then Chaplain in a private audience that when he sometimes felt rather lonely at night, he would take up his binoculars and look at all the churches in Rome. "When I do that," he said, "there is your little spire right in the middle of my window.” 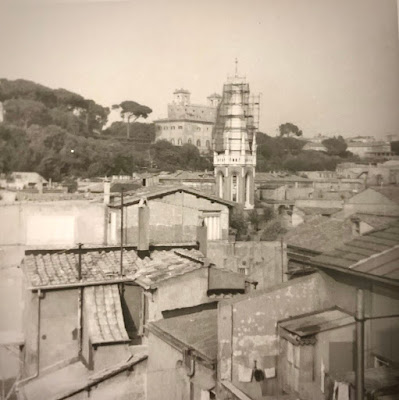