The Anglican Community in Rome, All Saints' Church - a walking tour. 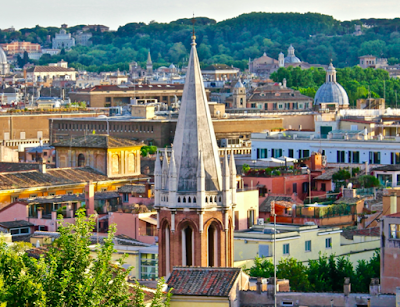 A view of All Saints’ spire from the Pincian Hill.

The fifth and last chapter of this history of the Anglican community in Rome is not strictly on the history of our church, but it is a tribute to the most precious fruit that our community has been able to produce, our beloved church of All Saints - the symbol of our long established legacy in this city, now a protected heritage site in the city's landscape, the sign that Anglicans are here to stay.
All Saints’ is a handsome High Victorian church building. It stands proud at the corner between the Via del Babuino and the Via di Gesù e Maria, the odd orientation of the building is given to two factors, one is that the church had to fit in the crammed space given by the location as well as by the fact that when it was built non-Catholic churches could not have its main doors facing the main road. The entrance on the Via del Babuino leads the visitor to the east-end of the south-aisle. The rich exterior in red brick and white Travertine recalls that of many Victorian churches throughout England, especially with its tall six-stories high tower with its travertine spire, the architecture is also inspired by that of northern Italy with its alternation of marbles and polychromy, George Edmund Street was highly influenced by that style when he visited the Veneto region.

In the corridor leading to the church is a memorial to the Revd. Francis Blake Woodward, beloved chaplain of the English Chapel between 1850-1866, it was designed by Mr. William Slater and its intricate design is centered around the depiction of the sacred letters IHS which appear in the central roundel. This used to be the reredos of the former Granary Chapel and it was moved to the current location in 1892. Together with the choir pews of 1857/8 it is the only survival from the original chapel. 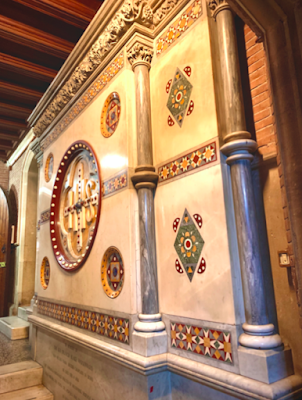 The former altar reredos from the Granary Chapel.

The interior of the church is lofty and spacious but perhaps not very luminous given its crammed location, it feels again very English and Victorian. George Edmund Street was the President of the Royal Institute of British Architects and a great promoter of the new high church movement of the 19th century (not that of a more Roman feel, but that inspired by Percy Dearmer). The interior at All Saints’ reflects that and it is centered around the altar and the celebration of Holy Communion. 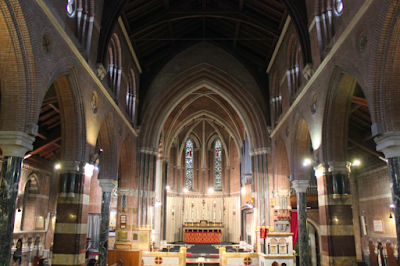 This would have been his last work. The nave is beautified by six pillars and columns decked in polychromed marbles from across Southern Europe: (green Carrara, red Perugia, black Verona and yellow Siena), as well as by twelve mosaic roundels symbolizing the evangelists and other themes from Scripture, they are also from the English Victorian school, some have attributed them to Edward Burne-Jones. The stained-glass windows throughout the church are by the London firm Clayton&Bell, who also designed some of the windows, as well as the high altar reredos at Westminster Abbey: the lancet windows in the chancel represent scenes related to the life of Christ, the window in the Lady Chapel represents the Archangels, the windows in the nave represent various English or Roman saints, the large lancet window in the counter-façade represents the Ascension of Christ, and finally the two lancets windows, near the door that leads to the Via di Gesù e Maria, represent Saints Peter and Paul, the patrons of Rome, on top of them is a little roundel with an angel. 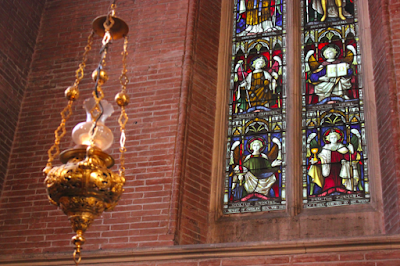 A detail from the Archangels’ stained-glass window in the Lady Chapel.

The Lady Chapel or Blessed Sacrament Chapel, created in 1913, comes with a very English-Use altar and the chapel’s hanging lamp signifies the presence of the reserved sacrament in the aumbry. The door of the tabernacle was given in memory of William Collins, Bishop of Gibraltar 1904-1911, whose end shocked the diocese as he disobeyed doctor’s orders in order to continue his continental confirmation tour. An 18th century copy of a Renaissance terracotta Madonna and Child by Benedetto da Maiano stands in the north end of the chapel. Traditionally, side chapels in English churches have long been dedicated to the Virgin. Looking at the chancel, behind the high altar is a fine marble reredos, designed by Charles Eamer Kempe, still bearing the great cross and six candlesticks commissioned when the church was built. Originally, the sanctuary was also decorated with a tester of red-damask fabric in the English Victorian style - it sadly deteriorated in the early 1990s and it was eventually restored in 2001 thanks to a generous donation by Jean Chiswell, twice churchwarden in the last years of the 20th century. The altar frontals, along with the pulpit falls to match, are changed with the changing of the liturgical seasons, and they follow Percy Dearmer’s late Victorian pattern of: blue for Advent, White for Christmas and Easter, Purple for Lent, Red for Whitsunday, and Green for ordinary time. Vestments, some of which still survive, have been used since Easter Day 1898 at All Saints’. The chancel represents an unusually complete example of late Victorian Anglican practice and it crowns a homogenous church interior. 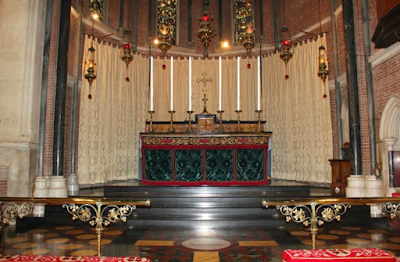 The Victorian blue high altar frontal we use during Advent.

The pulpit is a later addition in yellow Siena and black Verona marble with inserts of white Como marble. It is a memorial to Canon Wasse, chaplain throughout the construction of the church. It was designed by Arthur Edmund Street in the style of the early Roman basilicas. The chancel screen, also by Mr Street’s son, is in white Carrara, yellow Siena and black Verona and it is in memory of Cecilia, wife of the Honourable Henry Walpole. The design of the wall have been used in the motif on the hassocks made by the congregation in 1981. The Baptismal Font, given Mr. Swinnerton, of the London building committee, in 1883, and also designed by Arthur Edmund Street, is designed in various types of marble and it has various iconographical symbols: such as the fish, used in early times as a word for Jesus, because the word “fish” in Greek, ICHTHUS, could be spelled out as “Jesous CHristos Theou Uios Soter”, Jesus Christ, God’s Son and Savior.

Heartfelt thanks to all those kind souls of the past who made all this possible. Special thanks to the first chaplain of our community, the Rev. Richard Burgess, many thanks to the beloved and longest-serving chaplain of the Granary Chapel, the Rev. Francis Blake Woodward. Thank you to the Rev. Henry Watson Wasse, the generous first chaplain of All Saints' church. Thank you to Muriel Talbot Wilson, for her commemorative first centenary history of our community in 1816 and to Canon David H. Palmer, for his commemorative first centenary history of All Saints' church from 1981. Thank you also to the three British ladies who during WW2 were not afraid of the Fascists and saved our parish registers and silver, as well as Mrs. Pazzi-Axworthy and her industrial jam-making capabilities. Thank you to Lady Sibyl Graham, and her social skills. Finally, thank you to Mrs. Hammond and the many parishioners of ages past who made our community so rich and loving. May their souls rest in peace and rise in glory.