The Battle of Vienna. 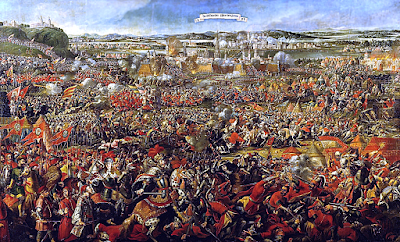 The Battle of Vienna took place on 11th September 1683 near Vienna - it involved the Holy Roman Empire, Poland-Lithuania, the Grand Duchy of Tuscany and the Republic of Venice led by the King of Poland John III Sobieski against the Ottoman Empire whose desire to extend dominions was stopped on this glorious day - this battle signed the end of the Ottoman supremacy in eastern Europe. The battle concluded with a great move by the Hussars whose general exulted the victory with Julius Caesar's (slightly changed) words: Veni, vidi, Deus vincit...  The battle was dedicated to the Blessed Virgin Mary of Czestochowa and masses were dedicated to Her in all the kingdoms involved in the battle - including Spain and Naples.

Chasuble sewn with Turkish tents, captured by the Polish army during the battle.