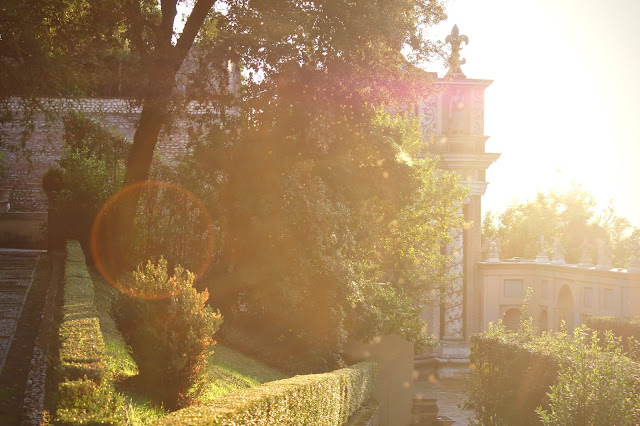 Here in Rome days are getting longer again. As the month of February is coming to an end and the cool of winter is making room for crisp but bright days, it is probably the best period to explore more remote areas of Rome. The Roman countryside boasts one of the most fascinating Italian sceneries. One of the most fascinating locations, right outside Rome is the little town of Tivoli, once an important crossing-point of the Grand Tour. Tivoli is known for its great villas, some of them dating back to Roman times, like Adrian’s Villa - although the finest is probably the Villa d’Este, which dominates over the surrounding area. 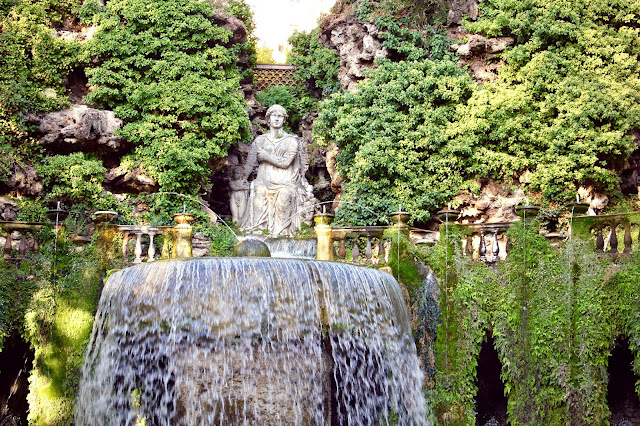 The stunning complex is a testament to the Renaissance genius. It was commissioned by Cardinal Ippolito d’Este, the second son of Alfonso d’Este, Duke of Ferrara and Grandson of Pope Alexander VI, along with Lucrezia Borgia. The Este family had been lords of Ferrara since 1393, and were great Renaissance philanthropists - being great patrons of the arts and humanist scholars. As a second son, Ippolito was destined for a career in the church, he was named Archbishop of Milan when he was ten years old. At the age of 27, he was sent to the French court, where he became an advisor to King Francis I, in 1540 he became a member of his Private Council. Three years later, he was made Cardinal by Pope Paul III Farnese, at the request of the King. Thanks to his family connections he became one of the wealthiest cardinals of the time. He himself was a great patron of the arts and supported sculptors, musicians, and poets, among them; Benvenuto Cellini, Pierluigi da Palestrina and Torquato Tasso. The new French King, Henry II, sent him to Rome as an envoy, where he played a major political role - he appeared destined to become Pope and used all his influence towards that goal, but at the time of the Counter-Reformation, his lavish lifestyle worked against him. In 1549, the Habsburg Emperor asked Ippolito to endorse his candidate as Pope, Ippolito withdrew his application and was made Governor of Tivoli, the College of Cardinals thought this would have been a good compromise to give him an important role, to keep him happy… but also out of Rome! He was extremely suited for Tivoli, being a collector of antiquities, there he could supervise the archeological studies on Adrian’s Villa, then at their dawn. 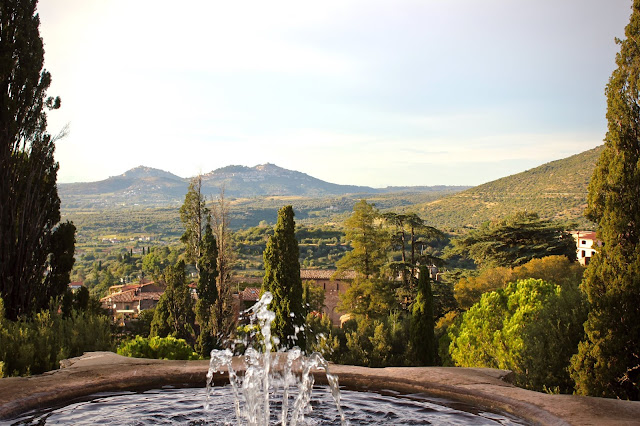 Cardinal d’Este tried to become Pope five more times, but never quite succeeded, he therefore decided to create his own court in Tivoli, and even his own Rome. Tivoli had after all been a popular summer residence since Roma times due to its altitude, the title of Govern of Tivoli came with an official residence located in a former Benedictine convent, built in the 9th century. In 1256, it had been donated to the Franciscans but it was not impressive enough to be the residence of a Cardinal. What it did have, was a great view on Rome, Adrian’s Villa, as well as an abundant natural water supply. The Cardinal commissioned a prominent classical scholar to work on the project on a new great villa with great gardens and fountains, architect Pirro Ligorio. 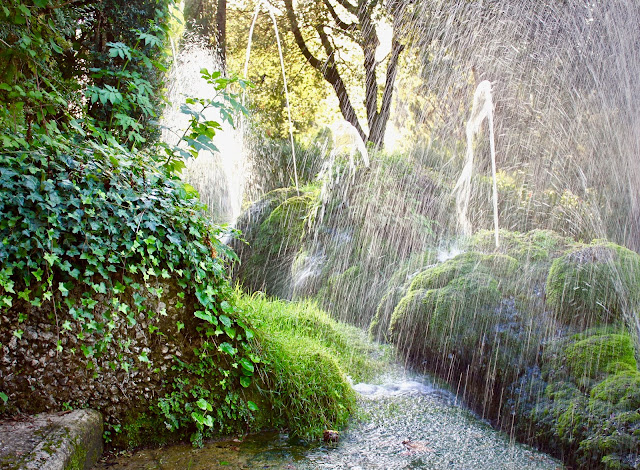 Construction was planned to begin at the end of 1550, but the Cardinal was distracted with diplomatic missions in Parma and Siena until 1555. Inconveniently, he was accused of simony by Pope Paul IV and exiled, his successor, Pope Pius IV rehabilitated him and restored his position in 1560. By 1569, more land had been acquired and about twelve different lawsuits against the Cardinal were filed by local residents. Between 1563 and 1565, work on the gardens started and a huge amount of earth was removed to make way for terraces, arcades, grottos, niches, nymphaeums and various fountains. The second river of Rome, the Aniene, was diverted to furnish water for the complex system of water-games. The steep slope of the garden proved to be a challenge, canals were dug under the town and hundreds of meters/feet worth of water-pipes were laid beneath the gardens. The garden was then divided into regular units, to respect the Renaissance principles of aesthetics. As a humanist, Cardinal Ippolito also had some of the sculptures from Adrian's Villa and the surrounding area installed in the villa - unfortunately some of them went to the Louvre after the French occupation. 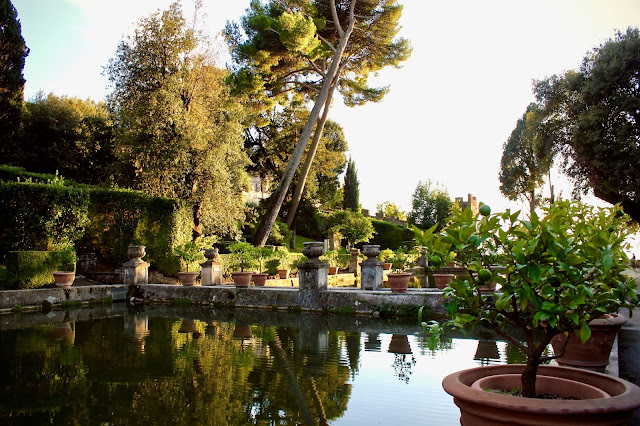 Further plans for the villa were carried out under the direction of Ferrara’s Alberto Galvani, a prominent architect and engineer to the Este court. The chief painter for the internal decoration was Livia Agresti from Forlì. Between 1565 and 1566, work began on the interior decoration of the villa, carried out by a team of great Roman Mannerist masters under the direction of Federico Zuccari and Girolamo Muziano. The rooms are decorated both with landscape scenes but also especially with themes of from antiquity, such as the sibyls or symbols or classical virtues - there is also a room of Noah as well as a room of Moses. The most stunning rooms, decorated by Federico Zuccari are the Hall of Nobility and the Hall of Glory, with the allegorical depictions of classical virtues. The same year the cardinal made his last attempt to become pope but failed once again, he therefore turned all his attention into the villa. Between 1567 and 1572, the rooms were decorated by some of the most popular artists in Rome of the time. By the completion of the project the cardinal was running out of money, but not before he entertained one more important guest, Pope Gregory XIII, for whose reception in the summer, the Cardinal then had to pawn his own silver. Ippolito died in Rome in 1572 not long after the reception and was buried in a simple tomb next to the church at the entrance of the villa. 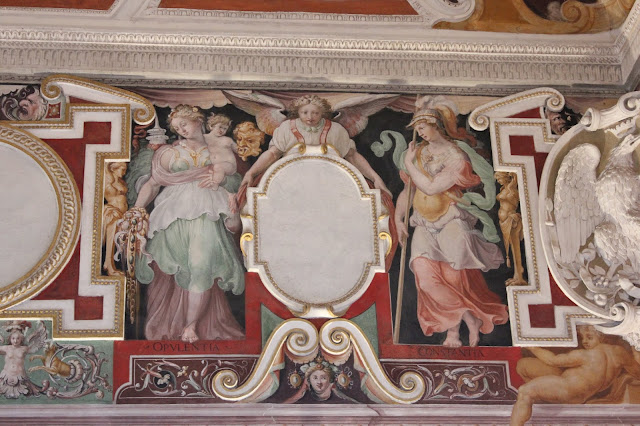 After his death, the gardens passed on to his nephew, Cardinal Luigi, who continued the work on it. During the 17th century, Francesco I restored much of the villa, and even commissioned new water-games and planted more trees. Cardinal Rinaldo I, commissioned two fountains to Gian Lorenzo Bernini in 1660-61. The villa belonged to the Este, on and off, but in 1796 the House of Habsburg took possession of it, after Maria Beatrice d’Este married with the Grand Duke Ferdinand of Habsburg. The villa was largely neglected, and during the French occupation of Rome at the dawn of the 19th century, French soldiers damaged the interiors (like they did more or less elsewhere in Rome). 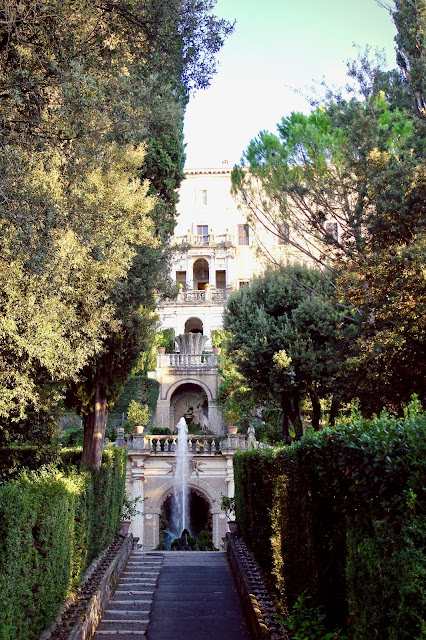 Between 1850 and 1896, the villa was owned by Cardinal Gustav von Hohenlohe, who restored it. During his tenure, it became once again a destination during the Grand Tour, given its great Romantic appeal. After the Great War, the villa was acquired by the Italian State, which began a major restoration in 1922. Recently, the rare water-organ of the villa was restored and it plays everyday for visitors. Thankfully, today the villa is one of Rome’s better preserved heritage sites. 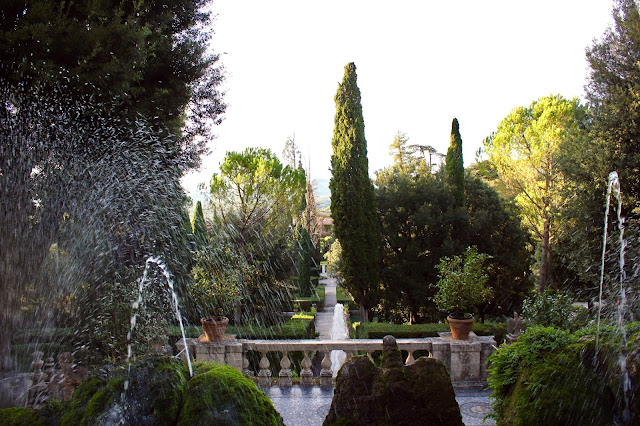 The glory of the villa are its fountains: fifty-one of them, and nymphaeums, 398 spouts, 364 water-jets, 64 waterfalls, and 220 basins, fed by 875 meters of canals, channels and cascades, all working entirely by the force of gravity, thanks to water supplied by the river Aniene. The Villa d’Este is the most copied villa in Europe, its gardens inspired most villas from Spain to Russia. 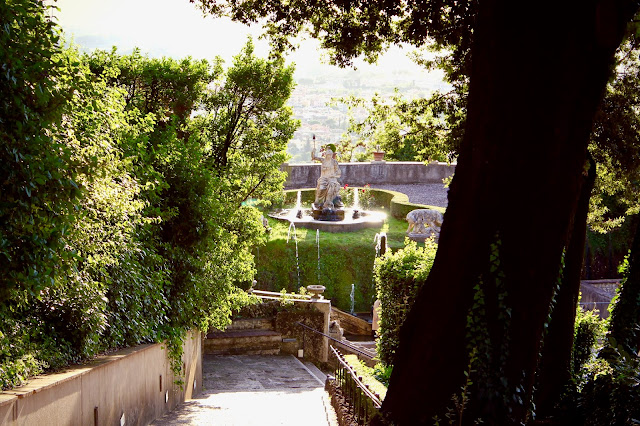 The gardens are accessed via a long terrace with a vista, the loggia that sits on a nymphaeum - here is the upper garden with the Cardinal’s Walk - a set of beautiful Mannerist fountains set in a bucolic space, with trees, and laurel hedges and with fountains and nymphaeums calling back to the classical world. These fountains include the Fountain of Europa, as well as the Loggia di Pandora, with her statue carrying a vase overflowing with water, symbolizing her story. In this section of the gardens is also the Fountain of the Biccherione, created by Gian Lorenzo Bernini in an odd - short shape, in order not to hide other fountains. Here are also the fine grottoes of Diana and Hercules, with the last one celebrating the labors of the classical demigod. At the center of the lower level of the gardens is the Fountain of the Dragons, enclosed in two semi-circular ramps, closing the view on the villa itself. The water-jet of this fountain is incredibly powerful. 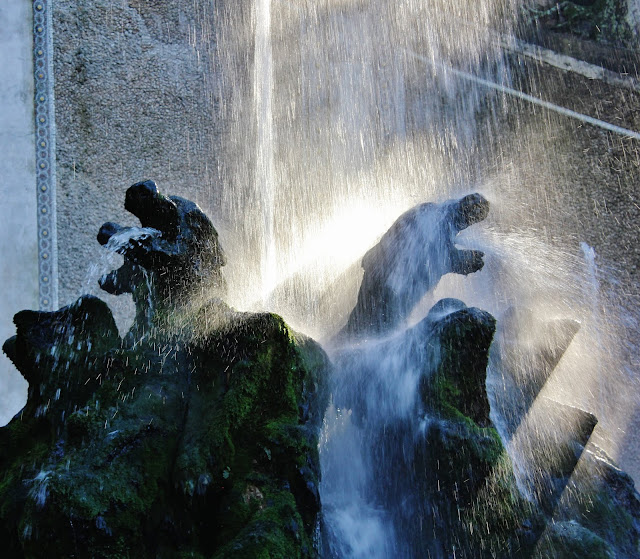 Here is also the Oval Fountain, with the beautiful statues of the Nereids, crowing a grotto dedicated to the goddess Venus. Perhaps the most astounding view of the upper garden is the famous “Hundred Fountains”. Perhaps one of the most celebrated gem of the Renaissance, these are three hundred sprouts, shaped in the form of grotesque Mannerist monsters, the long canal is decorated with spouts of lilies and eagles, celebrating the French monarchy and the Este family. 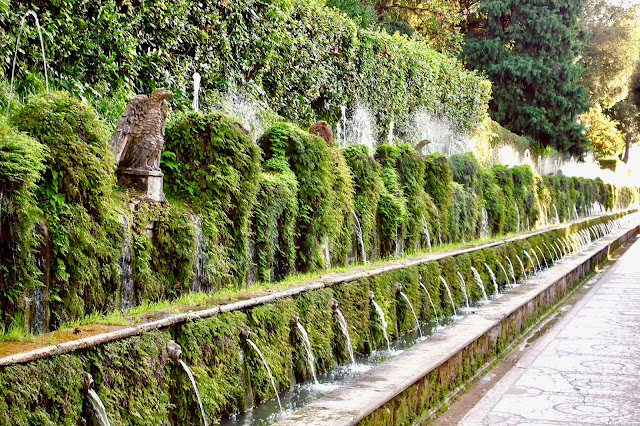 At the other end is the fountain that probably better represents the theme of the whole garden. The Fountain of Rometta, is an allegorical view of Rome, and it represents the Tiber flowing through Rome, its seven hills and landmarks. There is a little boat, and a statue, representing the river Aniene, which feeds the fountain. If the Cardinal couldn’t rule over Rome, then Rome was to come to the Cardinal. 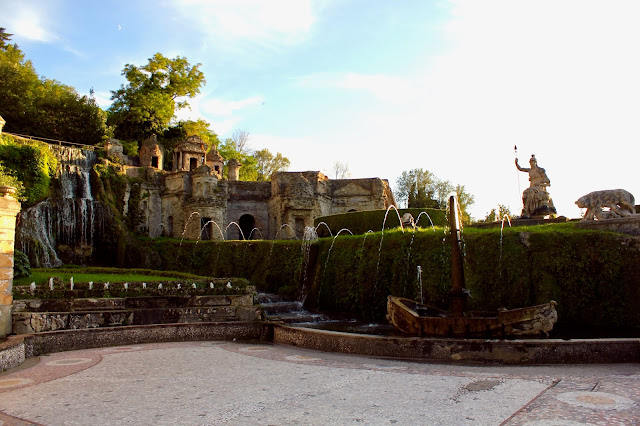 Further on is the Fountain of the Civetta, which had an amazing feature of bronze birds that could sing individually thanks to the power of water. Similarly, on the east-end of the garden is a great belvedere terrace, with a view opening on the great Bernini fountain of Neptune and the three great water-tanks (peschiere), then opening up onto a view of the Roman countryside. 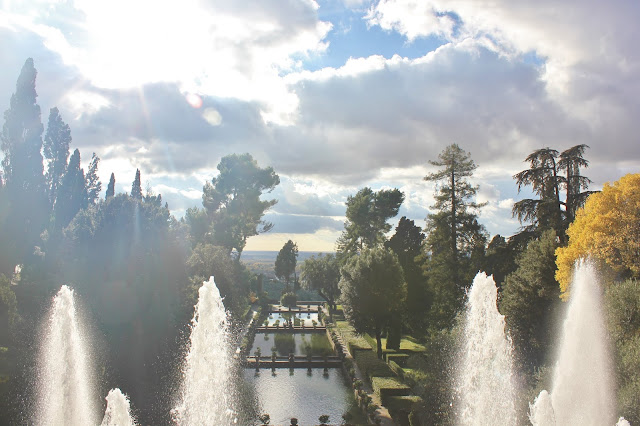 On the belvedere terrace itself is a beautiful fountain with a proper Renaissance water-organ, the first of its kind, that plays thanks to the power of water, it must have been a great addition to Renaissance parties… when Pope Gregory XIII visited the villa in 1572, he couldn’t believe it could play on its own and inspected the interior to learn if there was a trick. In the lower garden is a beautiful rotunda with cypress trees, a Baroque addition to shade visitors from the sun, and a Fountain of Diana of Ephesus, a fountain sprouting water from her multiple breasts as a symbol of fertility. The Mete are additional fountains made to look like natural rock formations or like the former Meta Sudans fountain by the Coliseum, where gladiators used to wash themselves. 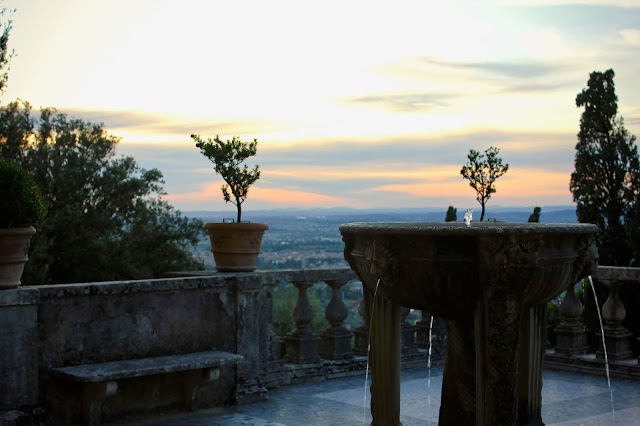 Today, the well-maintained Villa d’Este remains a truly ethereal location where time has stopped and the Renaissance genius reigns supreme among bucolic vegetation and stunning water-games, it truly is the Romantic dream and a place where the border between dream and reality is as vague as it can be. One can almost imagine those Renaissance parties…