An Introduction to the Doria-Pamphilj Gallery, one of Rome's greatest treasures. 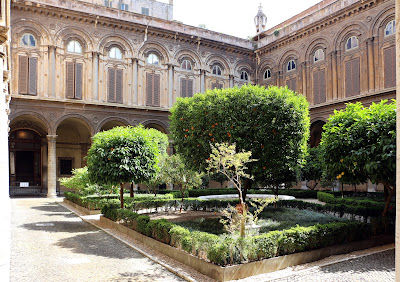 The Palazzo's courtyard
The Anglican Centre takes great pride in its lavish location kindly provided by the Doria-Pamphilj family, now almost since the very establishment of cordial relations between the Anglican Communion and the Catholic Church.
Standing proudly, at the heart of Rome, covering more than an entire city block between the Piazza Venezia, the Via del Corso and the Piazza del Collegio Romano, the Palazzo Doria-Pamphilj is one of the many gems of our city. Part of its charm perhaps is the very fact that it still houses its original family which has always taken great care of it.
The Pamphilj family started out in a small Umbrian town in the 9th century and by the 17th century had established itself as one of the great princely families of Rome, boasting the presence of a Pope, Innocent X, among its members - later in the latter part of that century, the Pamphilj merged with one of Genoa’s greatest families, the Dorias, one of whose members was the celebrated Admiral Andrea Doria. 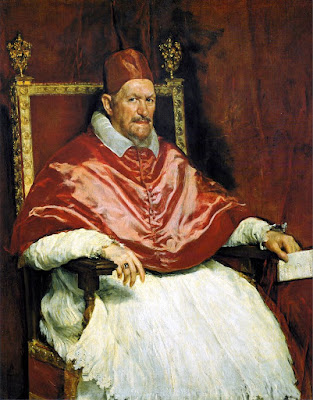 Velazques' portrait of Pope Innocent X
What we see now is one of Rome’s greatest Baroque buildings. The Palazzo Doria-Pamphilj al Corso is one of two Pamphilj palazzos in Rome, the other being the famous Borromini one at the Piazza Navona. The construction of the core of the present building started in the 15th century by a local Cardinal, and was eventually passed to Pope Julius II, famous for embellishing the Sistine Chapel on to the new Doria-Pamphilj with the Michelangelo frescoes. heirs when Camillo’s daughter, Eventually, the palace passed Anna married genoese Giovanni to the Aldobrandini family, and Andrea III Doria Landi in 1671 - finally in the 17th century it was purchased by the Pamphilj family which embellished it by asking the help of prominent Roman architect Carlo Maderno.
At the heart of the Palazzo is the renowned art gallery, one of the best in Rome, and a feature present only in the greatest palazzos. At its very heart is Velazquez’ stunning portrait of Pope Innocent X, commissioned in 1650 during the Holy year. Eminent members of the family continued to improve and embellish the building. It was in the 17th century that Camillo Pamphilj, son of Olimpia Maidalchini, one of Rome’s most powerful matrons, renounced the role of cardinal offered by his uncle, Pope Innocent X, in order to marry Olimpia Aldobrandini, the original owner of the palazzo. During their tenure the palace was further enlarged by purchasing and demolishing nearby buildings. The architect in charge of this process was Antonio del Grande who designed the beautiful courtyard on the Corso side of the palazzo. 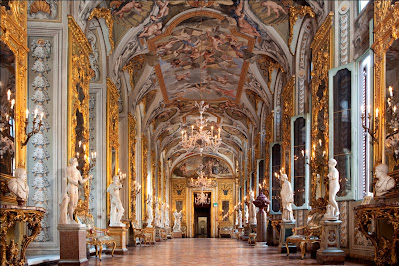 The Gallery's Hall of Mirrors
Camillo was succeeded by his son Giovanni Battista and Cardinal Benedetto, who were renowned for their interest in philanthropy, and during their tenure the splendid family chapel by Carlo Fontana was added. The palazzo was passed which was the beginning of the current line of the family. The first great work commissioned by the Doria-Pamphilj family would be the great Rococo façade by Gabriele Valvassori on the Corso, completed between 1730-1735, whose construction would allow the creation of the renowned art gallery. Later in the century a new façade was also added to the via del Plebiscito side of the building and the interior of the state rooms was decorated in the current scheme.
Among the greatest treasures of the palazzo are the 18th hall of mirrors, decorated with beautiful Venetian glass, and of course one of Europe’s best art collection, featuring masters of the range of Fra Filippo Lippi, Titian, Velazquez, and even Caravaggio, who’s Flight into Egypt’ remains perhaps one of his most timeless pieces. 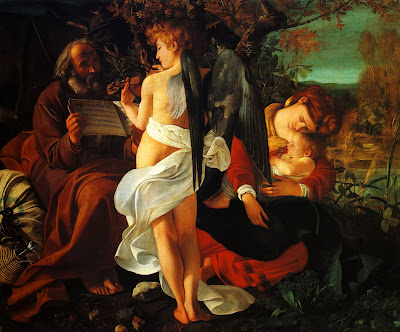 Caravaggio's Flight into Egypt
We are to be extremely thankful to share this space with such an important part of the history of the city of Rome, a great sign of respect and dedication from the Doria-Pamphilj family which continues in their generous philanthropy and love for ecumenism started by the parents of Prince Jonathan and Donna Gesine.