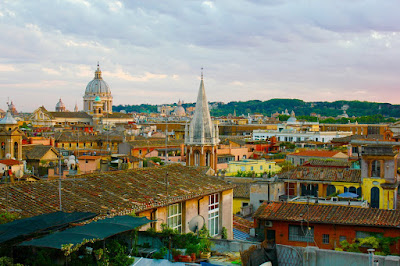 Many friends from abroad have been asking me how I was doing during these troubled times. This week, the entirety of the country has been effectively quarantined. We’re not allowed out, almost every business is closed, the city is effectively dead. My grandmother said she has never seen anything like this during her lifetime. As we all know, churches in Italy have been closed down for church services and activities through a joint statement by the Italian government and conference of bishops. The last time All Saints’ closed down was 80 years ago, on 3rd June 1940, for the beginning of the Second World War. Little did we know that last Sunday we received our last communion. This troubles me deeply.

Last week our Young Adults group was halved when all of our American students had been sent home in vision of the regulations that came into force this week - this caused moments of sadness and resignation between all of us. It was only the beginning of the crisis.

We’re asking many questions - when will this be over? Will it happen again? Will it get worse? Am I at risk? Many are concerned - nobody has an answer and this is cause for concern.

The Coronavirus outbreak is worse than we all thought, it’s growing without control. We were not told enough when we could have done something more. I have friends who work for the government and they have been issued with a private statement that says that by the end of this week, Coronavirus cases in Italy will increase by 300%, reaching over 15,000 people, from the almost 10,000 we have now. Three weeks ago we had no more than 100 cases throughout the country, comparing these numbers is a cause for concern - this virus spreads quickly. Experts say we are not even close to the peak, the virus may end up infecting over 100,000 Italians. Rome itself has many more official cases than reported by the media. The mortality rate for +80 years old people is almost 40%. We have not been told we are dealing with SARS again, except a type of it which is essentially on steroids, the official name of this virus is SARS Covid-19.

I am not at all worried about me, or other healthy young people - my concern is about my grandmother or other elderly or vulnerable people. My appeal is to be cautious. We have a responsibility as citizens and as Christians - please, do not be selfish.

I know it is hard to not being able to come to church, do remember however that God is always with us. For those sharing in this struggle, remember that the first example of Church is our family. We can still pray with our families at home, especially on Sunday. The Book of Common Prayer of the Church of England has a set of Morning and Evening Prayer services that can be led by lay people, they can also be found on the mobile-phone app “Daily Prayer”. If you miss church, don’t forget that this is a great way of worshipping too. Be a leader and welcome God in your homes. Many Anglicans have been worshipping like this for years. Do not forget that God is always with us.

The great English poet, William Shakespeare, once wrote in his Julius Caesar: Friends, Romans, countrymen… and I will add - this city has given birth to Caesar and Augustus, we have been home to Raphael and Michelangelo. The history of our wider Western society was moulded in between the seven hills that make up this city. All the historical characters who mattered passed through the marble gates of Rome. We have survived endless Barbarian invasions, plagues, fires and flooding. We have recovered from the Sack of Rome, the Napoleonic invasions, the rule of Mussolini and the joke of the Nazis. We even survived terrorism, but also bad governments and terrible financial crises. Yet, my friends. We are still here, and we will always be. Much like Lady Hester Random and her friends in Tea with Mussolini we will get over this too. Rome will never fall, and neither will the Romans; old and new, young and old, cradle or adopted, white or black, male or female. Do your duty as citizens and fight by observing the rules. Among the marbles of antiquity, the Renaissance order, and the Baroque drama, we shall continue to fight the good fight by being safe and not by being selfish.

Do not panic, protect the vulnerable, be wise - follow the government advice on what to do and what not to do. Please pray for us, as we pray for you. Protect your neighbor, especially your vulnerable neighbor. We’re a strong congregation, we have survived, heat, plague, wars and financial crises in our long history here as Anglicans in Rome, and we always came to the light. Our duty now is to be safe and to protect each other. Let us follow advice and it will be over soon. My message is that while church is closed, let us try to enact Jesus’ message in our homes. He will always be with us. Jesus once said: I am with you alway, even unto the end of the world. Amen.

Thursday, 12th March, Update: by now our country has been in a lockdown for three days, since the Italian government started its battle against the Coronavirus. Italy is not known for its efficency but in fairness to them, they have been excellent in the carrying out of tests since the beginning of the outbreak. Meanwhile, the rest of the world kept ignoring the problem - countries such as Germany, France or Spain probably have just as many cases as Italy. Today, it has emerged that the UK may have between 5,000 and 15,000 cases - the same is true of the United States, where the disease is spreading incredibly quickly in many parts of the country - without much prevention going on and where the total number of cases is a lot lower than reality, partly because of the price of a test. The reason for this is not that Italy has been particularly hit by the disease, the issue is that other countries have not been testing its citizens for the virus - at least not quickly enough - neglecting the problem has made it worse, as we are quickly seeing with the US, the UK, Spain, France and Germany. It will get much worse, probably worse than in Italy. Here, in three weeks, the number of infected rose from about a hundred to 15,000 (about 80,000 as of March 26th) - how quickly will it happen elsewhere without the same amount of care or concern? Many countries have not and are not handling this issue well enough. Therefore, be safe and follow the precautions: wash your hands, use hand-sanitizers, don't touch your face, mantain at least 8ft of distance between you and other people, and sneeze or cough in your elbow. Do not go out if you don't have to. Be safe and help saving others. The reason for this update is that I have many friends abroad - some of whom are ill or vulnerable, be responsible, be safe. It will be over soon. God is always with us. Thursday, 26th March, Update: as of today Coronavirus cases sky-rocketed all over the world, with the worst hit countries being Spain, France, Germany and the United States, in the past few days, where the outbreak is growing faster than it did here - these countries and the UK have all implemented similar lockdowns as Italy did over two weeks ago. We keep praying and hoping for this to be over soon.