The Bufalini Chapel is located in the right aisle of the basilica of Santa Maria in Aracoeli. This is the first chapel coming from the entrance and is famous for preserving the frescoes with the Stories of St. Bernardine of Siena by Pintoricchio. The frescoes date back to 1484-1486 and were commissioned by Nicolò Manno (Riccomanno) Angeli Bufalini who was an important citizen of Città di Castello, he held the position of consistorial lawyer in Rome. The coat of arms of his family (a bull with a flower), often appears in the chapel.

The first cycle of frescoes in the Sistine Chapel made by the most prominent artists of the time (Ghirlandaio, Botticelli, etc.) was completed in 1482 - these artists came mainly from Florence and Umbria, among them there was Pintoricchio who unlike the others who went back to Tuscany or Umbria stayed in Rome and opened a bottega with a workshop made of people who worked with him in the Vatican. Until then Pintoricchio was only an artist on the shadow of Perugino but now he could take advantage of the gap left by the great artists - he could then work on his first commission in the Eternal City: the Bufalini Chapel. Here, he demonstrated to be fully capable of organising and leading an enterprise of great complexity. Also, he was already trusted given the quality of his work in Umbria. There are no records on the execution of the frescoes, but they are usually attributed to the years 1484-1486. The chapel has a quadrangular base, with vault and floor decorated with cosmatesque mosaics. The frescoes unfold on three walls and the ceiling and are dedicated to the life and miracles of St. Bernardino of Siena, a saint who was then promoted by the Franciscan order and who was very popular in the Renaissance. The Aracoeli was in fact run by the Franciscans Minors, and the frescoes also feature two stories of St. Francis; also the Bufalini family was particularly close to Bernardino, because his preaching sedated discord among them and their rivals, the Baglioni and the Del Monte - the whole chapel is also dedicated to this peace. 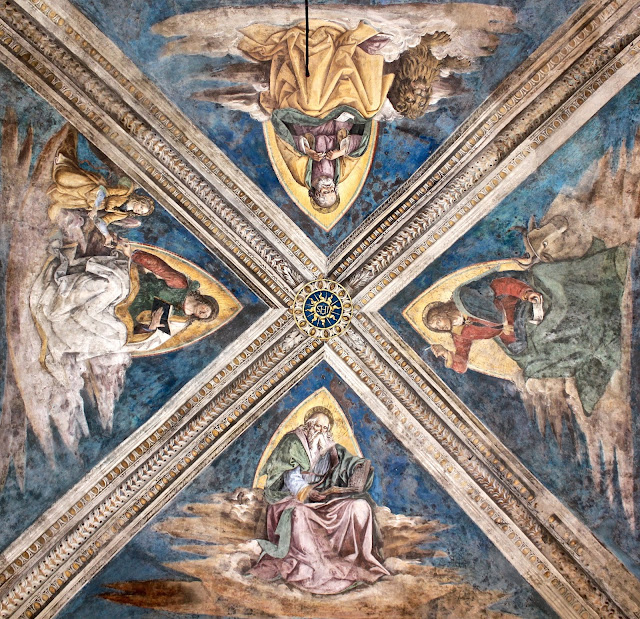 Usually the work started by the segments of the vault, where there are the four Evangelists, depicted in a style taken from Perugino. The poses of the evangelists are studied carefully and show a greater vivacity than the serene classicism of Perugino.

On the central wall there is the glory of San Bernardino - it is divided into two registers such as the lost Assumption of the Sistine Chapel by Perugino. In the lower register there is San Bernardino standing on a rock with open arms and surmounted by two angels who crown him, on his sides there are St. Louis of Tolouse and Saint Francis. In the background there is a landscape with a lake - very similar to those of Umbria. The upper register shows instead Christ in the act of blessing, within a so called “almond”, between angels, both praying and playing musical instruments. Also in this case, the scheme is “peruginesque” though showing a greater expressiveness, perceptible both in the figures, both in the fanciful landscape rocks, which avoid symmetrical patterns and amplify the spatial depth. Bernardino is holding an open book in which we read "Pater MANIFESTAVI NOMEN TVVM (H) OMINIBVS", which refers to the invention of Christogram IHS of the divine name which cost the Sienese saint a charge for idolatry and heresy. 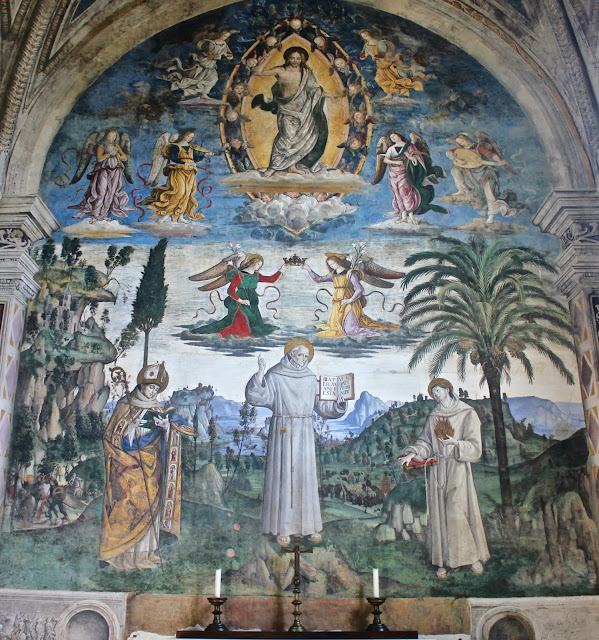 Below this was a monochrome band in a classical style. It is today only readable for a while, there used to be a series of false niches and reliefs, including the remains of the military parade with prisoners and satyrs. It is an early example of the antiquarian taste that was spreading in those years in the Rome area, it was resumed shortly thereafter also by Filippino Lippi in the Carafa Chapel. 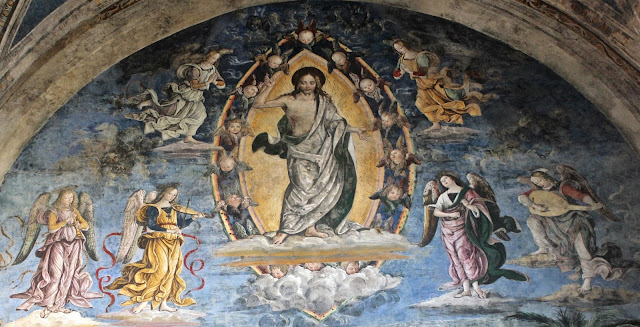 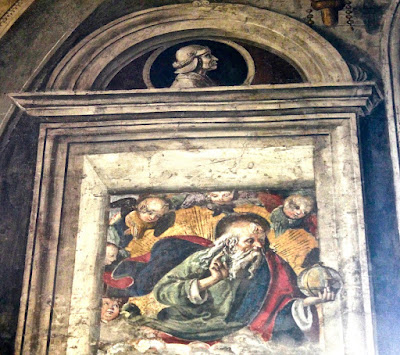 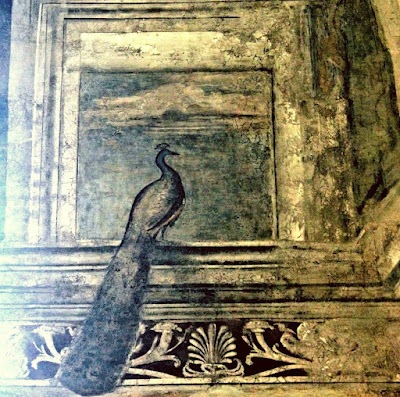 On this wall Pintoricchio created an illusionistic space by painting two false symmetrical windows, one with the Eternal Father in the act of blessing, and one with a peacock, early Christian symbol of immortality. There is also a scene from the life of St. Bernardino of Siena: Bernardino receives the religious habit. It is set in an oblique perspective that exploits the decorated pillars with a grotesques arch. Under the actual window there is an opening with illusory five people, including a senior monk, perhaps the prior of the monastery, and a layman, maybe an administrator or an donor of the Basilica. Finally, there little scene on the right represents St. Francis in the act of receiving the stigmate - in honour of the Franciscan foundation of the Aracoeli. 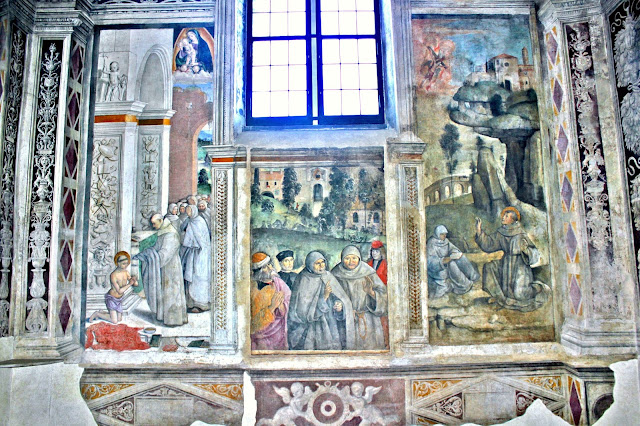 The left wall is organized into two overlapping scenes, separated by a cornice with painted frieze. The top bezel shows the Hermitage of young Bernardino, while below is the scene of the Funeral of San Bernardino, set in an urban space with a checkerboard floor which is rationally organized with the prospect that catches the viewer's eye to the vanishing point, that It coincides with a building in central base, based on the one from the delivery of the keys by Perugino. Pintoricchio changed the model by lowering the heights of each of the buildings on the side, this feature enriches and changes the scenario. To the left is in fact a porch with pillars decorated with fanciful golden grotesques, which comes almost at the threshold of the first floor, while on the right, farther, is a cubic building connected to a double spacious loggia and the background is open on the landscape and the sky is clear. 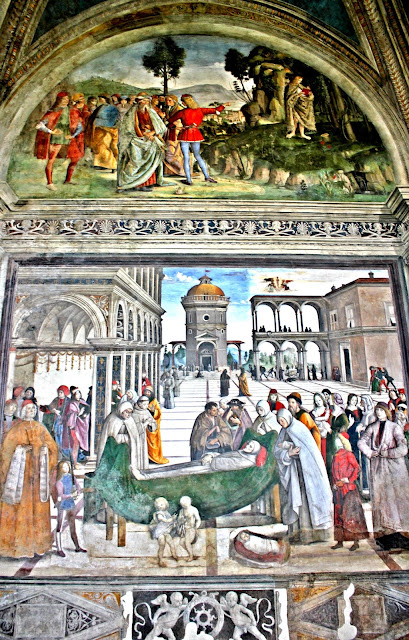 In the funeral the saint is lying on a bier, placed sideways, it increases the sense of spatial depth and the characters interact with the surrounding space very well. Monks, pilgrims and ordinary people come up to pay homage to the saint, while on the sides there are two contemporary figures who are richly dressed, they were recognized as the head of the family himself (left with fur-lined hood and a glove worn and one in hand) and another member of his family. The man with the hat on the extreme right might be Pintoricchio himself. 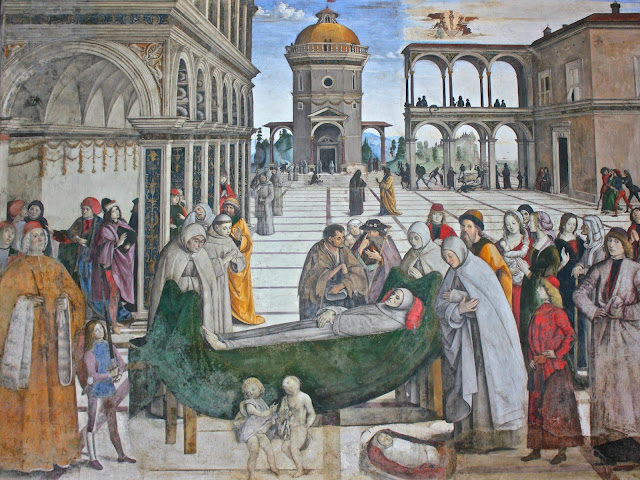 The rest of the characters that populate the square enact a series of miracles performed by the saint in life: the healing of a blind man (who point to eyes), the resurrection of a man possessed by the devil, the healing of the stillborn baby of John and Margaret Basel, the healing of Lorenzo di Niccolo da Prato wounded by a bull and the peace of the Umbrian families. 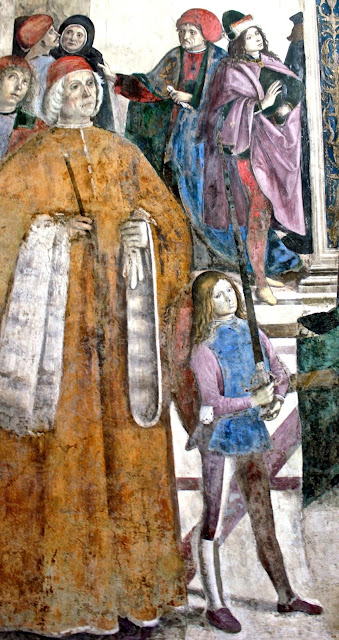 In this work there are clear influences of the many paintings of Perugino at this stage: the rational Urbino/Umbrian perspective, the variety of poses, inspired by the Florentine Benozzo Gozzoli and Ghirlandaio, the pungent characterisation of the poor pilgrims and beggars, derived from the example of the Flemish masters. 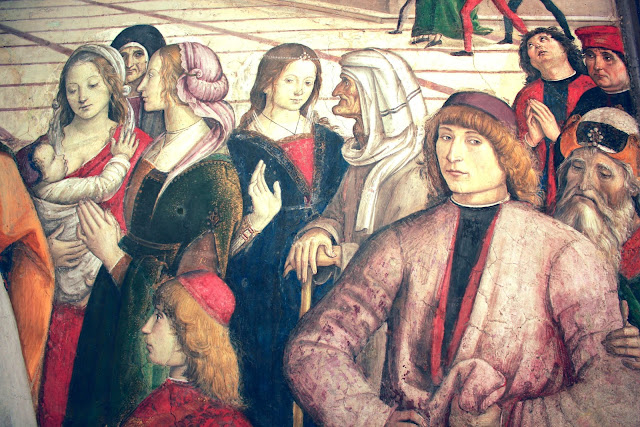 In the lunette there is a representation of St. Bernardino being penitent before the Porta Tufi in Siena - this fresco shows a young Bernardino’s first hermitage.

The grotesques that decorate the pillars are of great quality, they are overloaded with fantastic elements, monsters, animals, plants and ornaments, imitating the ancient reliefs and the first grotesque discoveries in the Domus Aurea. In all the frescoes there are lovely details - such as the background in the central wall, with procession of soldiers on the left and the rock with the castle on top or the beautiful vegetation in the lunette. 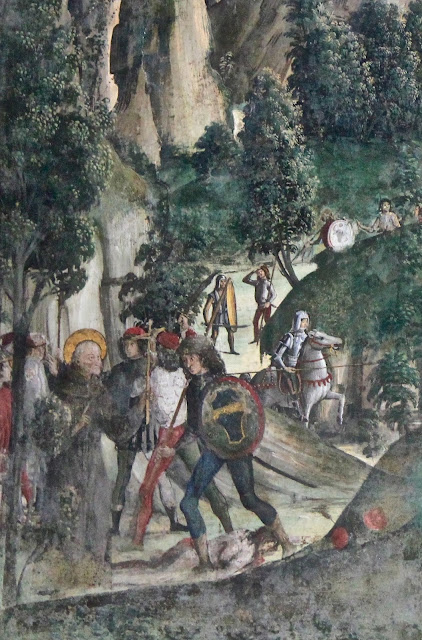 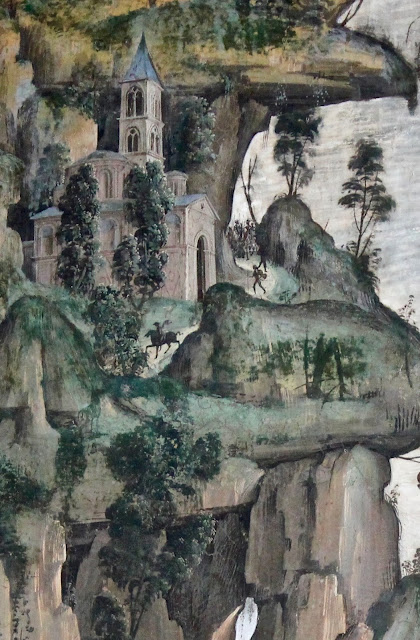 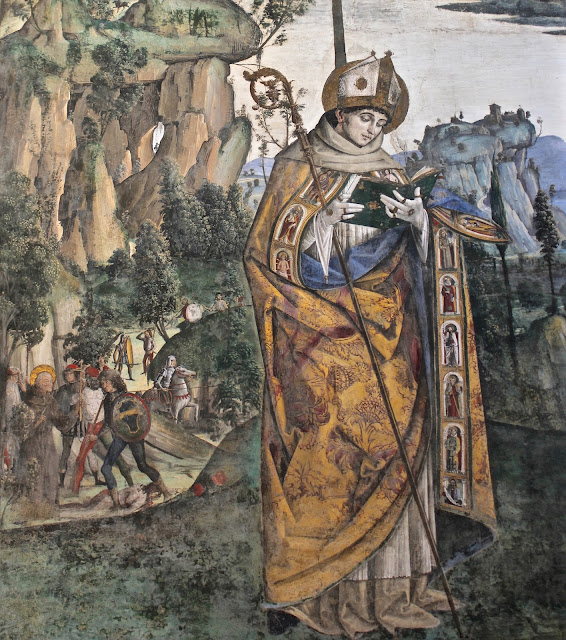 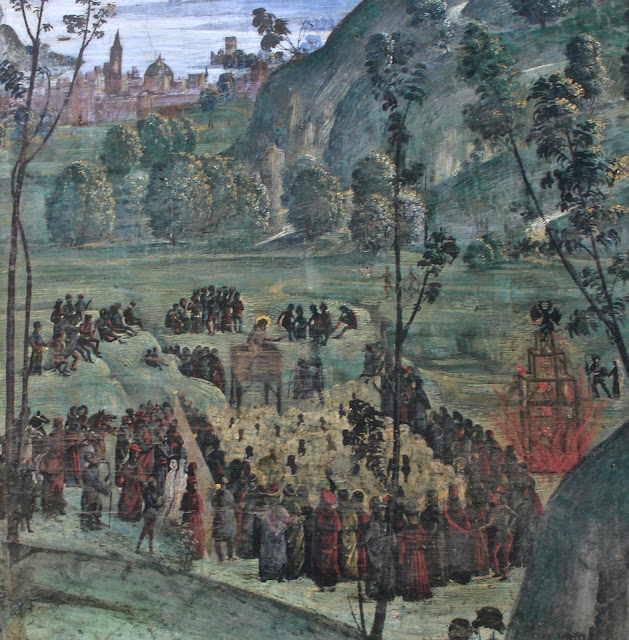 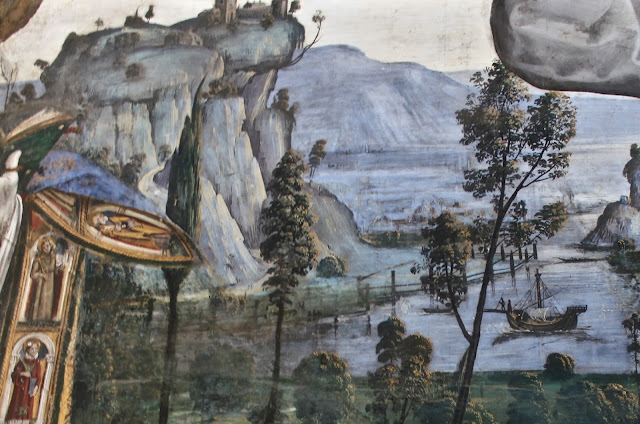 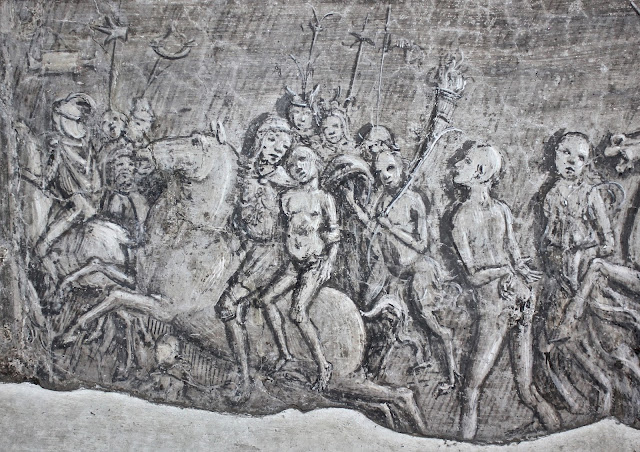 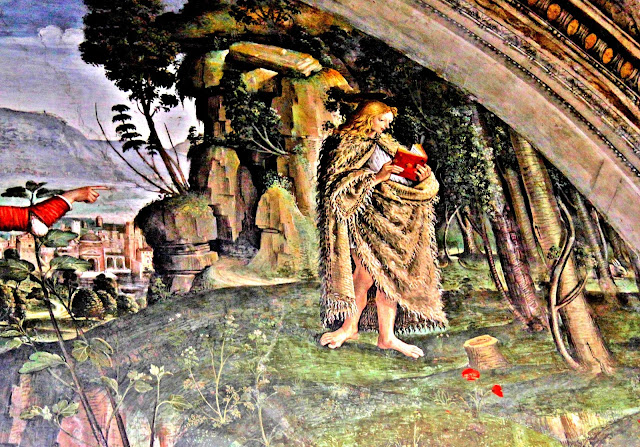